i woke up quite late on the morning of day 9, partly due to tiredness and to the fact that our next destination was only 200 km south. when i opened my eyes, zack was already gone to four square to get our breakfast. ija, aina and the kids were still sleeping so i tiptoed through the bedroom to the toilet for a hot shower.

zack got back with some donuts, pastries and chips. i had a proper breakfast that morning and since it was so comfortable, i decided to checkout as late as possible. after brekky, i walked out to take our laundry and realized that it was mightily quiet inside the block and it was no wonder that zack, ija and aina got creeped out the night before. i took out the dried clothes and brought back to our place for zack to pack. we woke up the kids, ija and aina, forced them to eat at least something and brought the kids outdoor to let them play on the frozen ground. there were still patches of thin snow on the grass that fell on the day before. the temperature was 2°c. the backpackers area was quite large with designated place for caravans and ben ohau range could also be seen from a distance.
▼▼ ben ohau range from high country lodge and backpackers, twizel 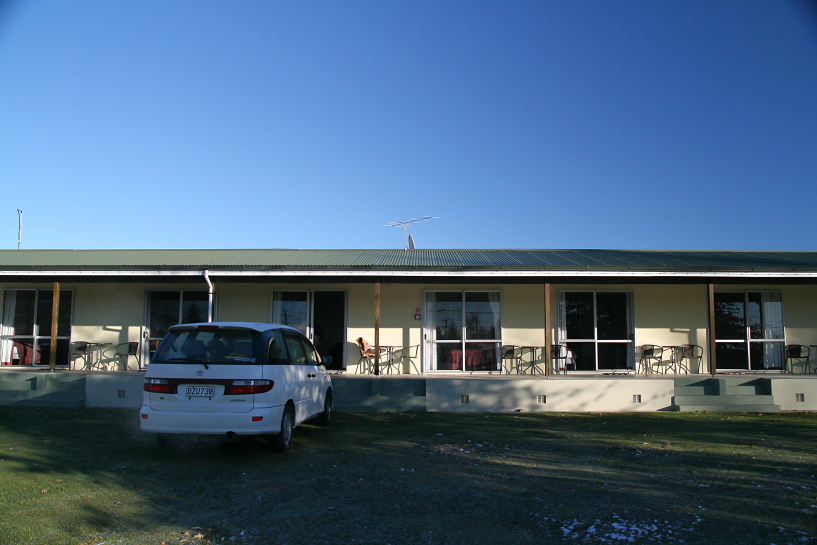 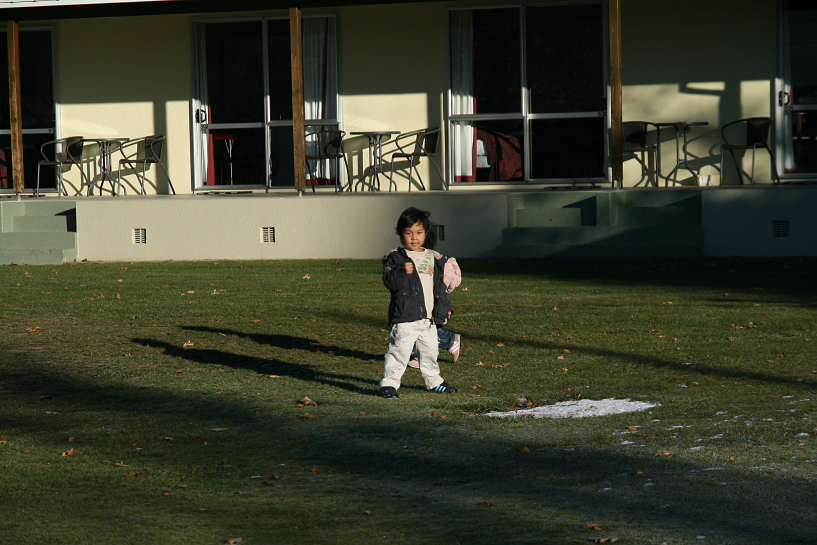 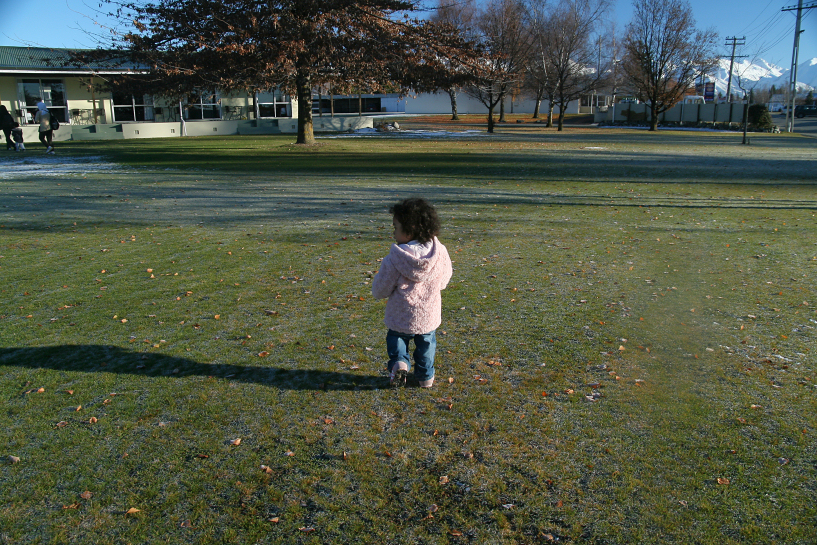 we left the place at 11:00 am and i drove leisurely next to the scenic ruataniwha lake, and later we passed the town of omarama, all through sweeping views of the southern alps. afterwards, the road (sh8) began to gradually climb uphill and when every corner was covered with gravel and sand (to abate ice and make the road less slippery), i knew we were back in high country. that high country is the lindiss pass.
▼ lindiss pass

when we reached lindiss pass, the snow there was the thickest yet. i had to drive really slow and careful and started looking for a place to pull over. we found the place later, a scenic stop with a stacking slabs sign welcoming us to waitaki district.
▼ getting out

this time, they had enough snow to make a mini snowman, snow fighting and in alif’s case, eating more snow. alif and yomi kept insisting on putting snow inside an empty bottle (maybe to drink later) and we let them, again. the views were spectacular with white powdery ground contrasted to the deep blue sky. i stopped for half an hour until they were shivering with cold and we got back inside the car and moved away, going downhill through the otago region. both the kids wailed with frustrations when their snow melted.
▼ spot the kangaroo 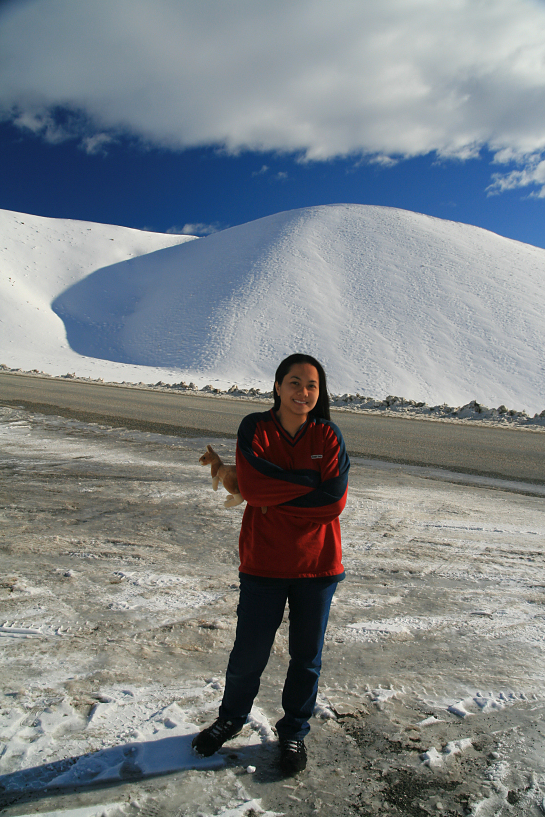 ▼ sitting close together for body heat 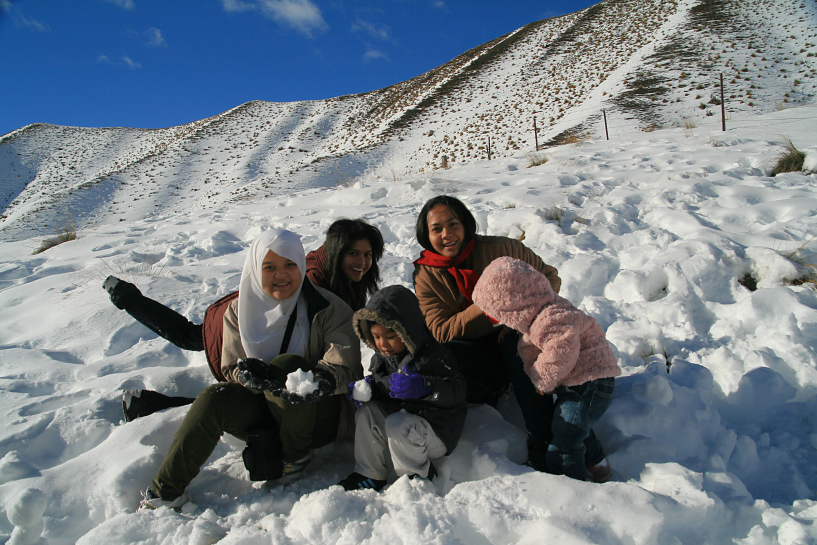 ▼ the look on yomi’s face

▼ building a snowman or making an extra large ais kacang 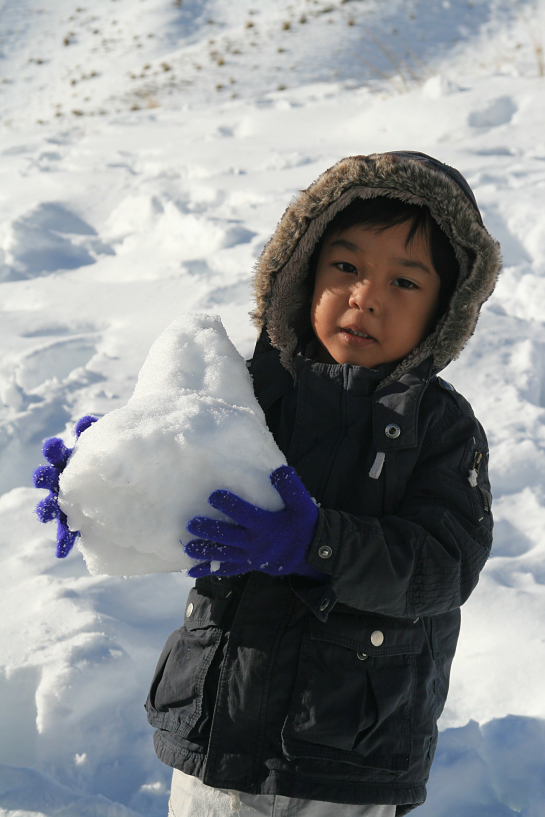 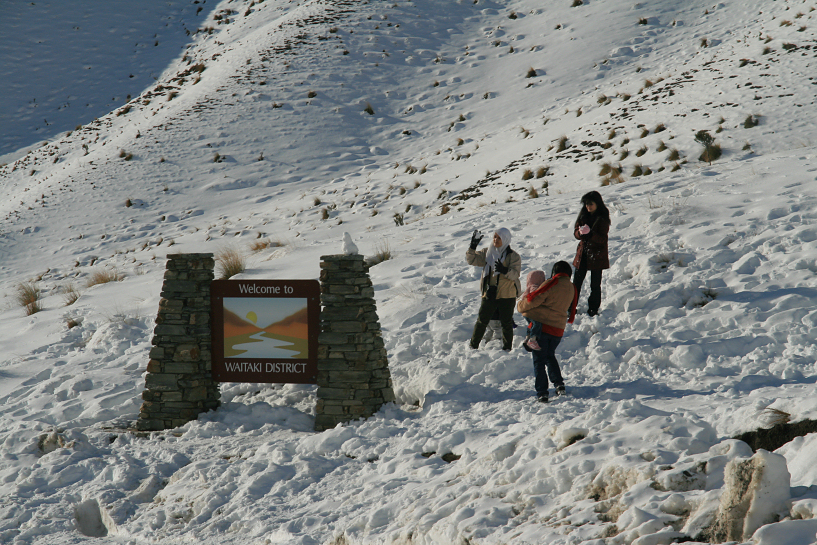 later, the road runs parallel to another scenic lake, lake dunstan with pisa range at the back and a rainbow next to it. we left sh8, joined sh6 and we skirted through the town of cromwell while chasing the rainbow and it ended near a citrus grove just behind jones’s fruit stall where i parked again and let the others went inside to buy kiwis, grapes, pears and more tiptop ice creams. it was 1:30 pm.
▼ lake dunstan with pisa range 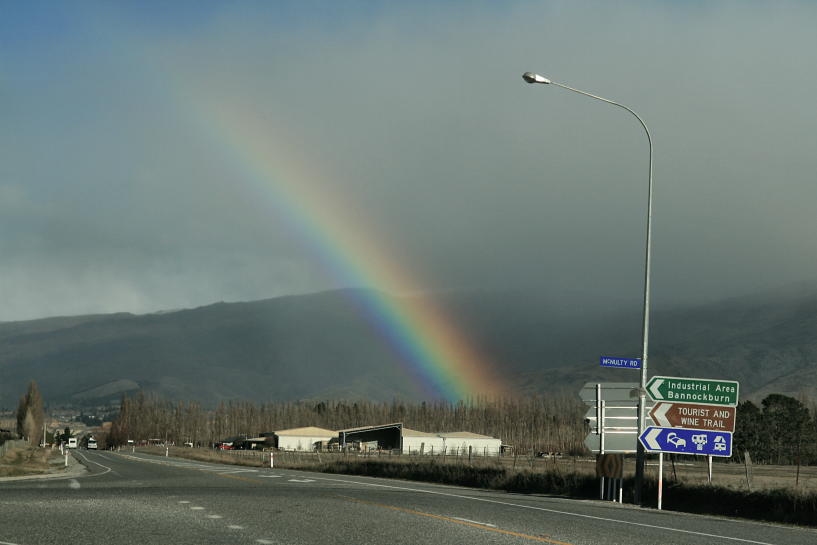 approximately 30 km before reaching our destination, the road winded through a gorge where mountains surrounded us on each side, pisa range on our right (north) and carrick range on our left (south). the river, next to us, bright green in colour, is kawarau river, and kawarau gorge, with its historical value of being a gold mining site of old was our next stop along the road. however, we only stopped for less than 10 minutes, just strolling through midway of the bridge and we returned back to our car. the place was also the origin of bungee jumping due to its deep gorge and it was sadly not on our itineraries.
▼▼ at kawarau gorge 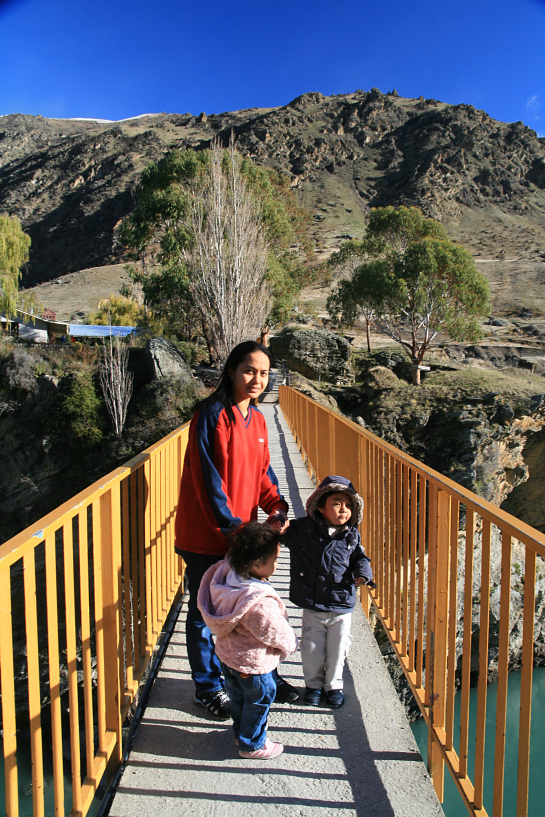 we left the place soon after and the road settled into flat lands, the ideal place for more vineyards near lower shotover and frankton. next to the town of frankton, the suburbs of queenstown and its famous and mighty lake wakatipu came into view. our hearts leaped into joy of the beauty the town presented to us and i steered the car slowly through mid heavy traffic and found our accommodation for the night at man street. it was 2:30 pm and still a lot of time before the sun set and deco backpackers was right at the end of the street. the road was full of parked cars and i had to wait inside the car while zack went inside to check in. she got back and told me that we could park the car inside the driveway to a house next to it which was also theirs and where our rooms were, but the guy needed to see us first for identification purpose. i felt a bit frustrated of the way he treated us. it was also the only accommodation that i booked without the help of lonely planet’s new zealand travel guidebook. he told us that he wasn’t informed that we would be bringing kids and when i showed him my email that he printed mentioning about the kids, he cooled off and became very friendly and talkative instead and led us to our rooms through the back garden with a view of lake wakatipu.

we brought our bags inside the rooms, one room for me, zack and the kids, another room for aina and ija. there was another occupied third room and all of us would be sharing the same shower and toilet. after taking a breather, i suggested that we just walked to the town centre but not before we tried the panoramic views from the hilltop using the skyline gondola.

walking towards the skyline gondola was quite challenging as it was at the base of the rocky hill, the kids grew tired and we had to take them on our shoulders while walking an uphill road. it was about 300m from deco backpackers. zack queued and bought tickets and i got inside one of them with alif and aina while zack got inside another one with ija and yomi. the gondola rattled slowly up the steep climb and alif and aina got scared a bit but 10 minutes later we reached the top, ben lomond. we waited for zack’s gondola to arrive and walked together to the viewing deck.
▼ on the way to the top 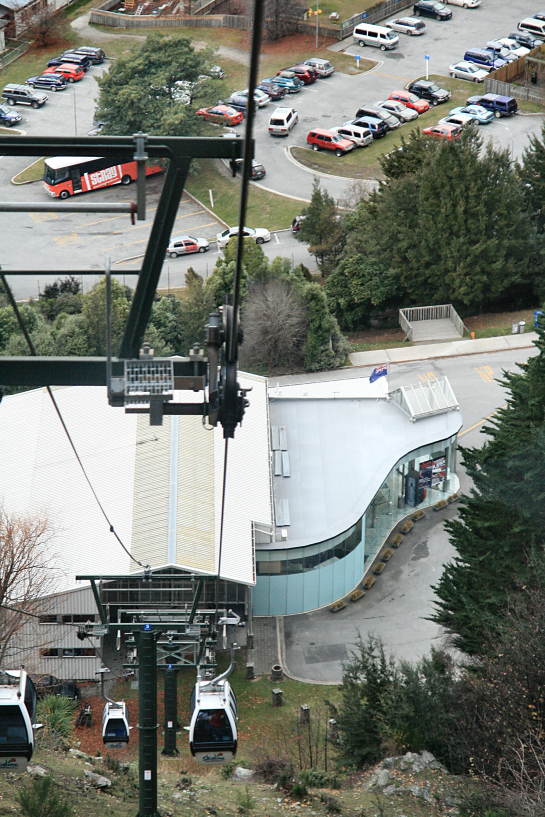 ▼ queenstown suburbs and the remarkables 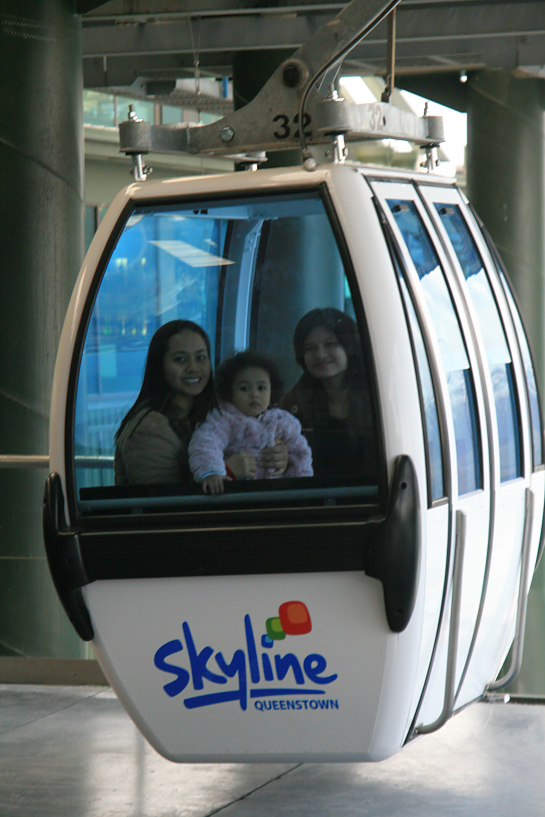 the deck was cold and very windy but provided an excellent landscape of the coronet peak, queenstown, the remarkables, lake wakatipu, cecil peak and walter peak. it was so windy that i had to hold to the metal railings for dear life. we also met a malay family who came from singapore and also self drive through new zealand. it was already late afternoon and we decided 30 minutes later to climb down the gondola and walked to the town itself.
▼▼ from the viewing deck 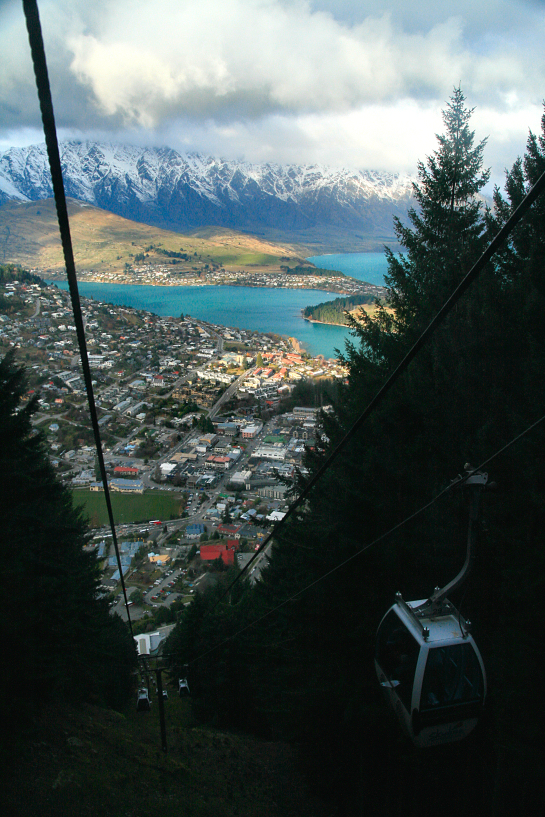 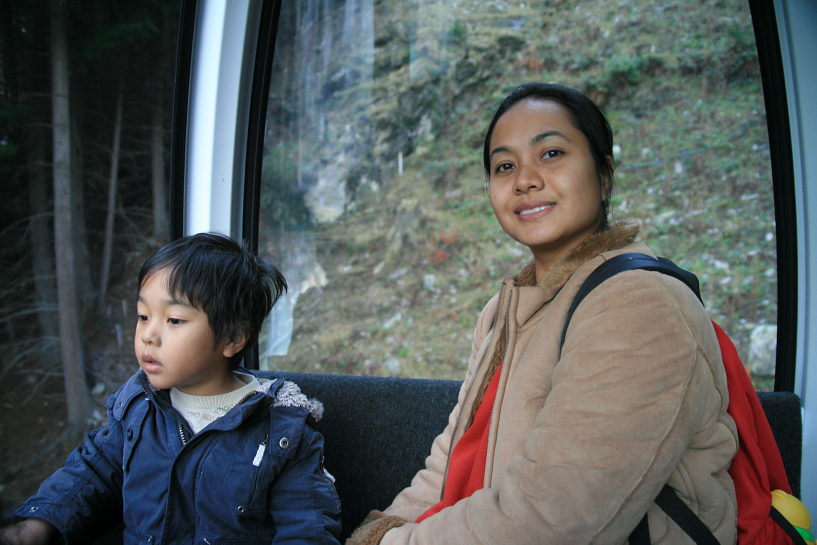 walking to the town took us only about 15 minutes and we stopped walking only when we reached the shoreline of lake wakatipu. there were small waves with the resident ducks minding their own business and we just sat on the benches absorbing the views. later we went to the town centre and found ourselves surrounded by souvenir shops, lots of them with signs in japanese and other languages. zack got inside one of them and bought keychains, shirts, magnets, postcards, paua necklace and a sheep plush toy for yomi. next to the shophouses along queestown mall we found a wool shop where zack entered with aina and ija and bought some wools for kak yah, aina’s mother.
▼ zack phooning near lake wakatipu, witnessed by cecil peak (left) and walter peak (right) 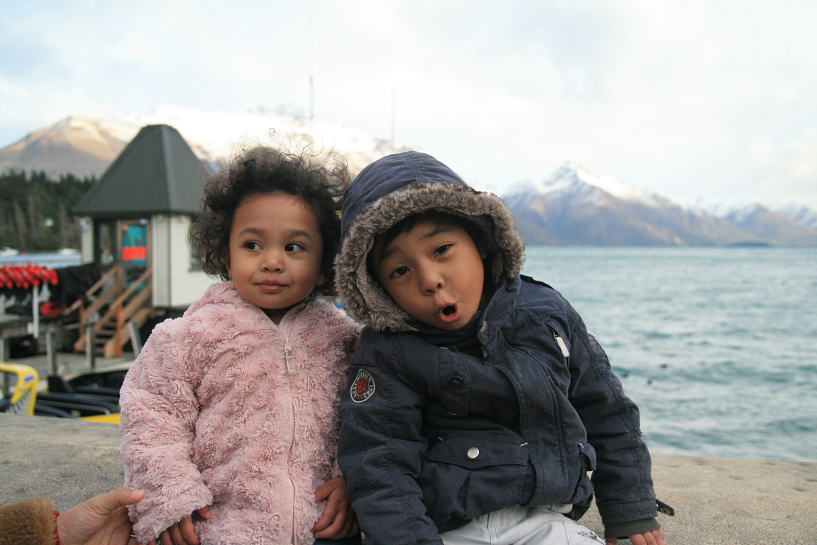 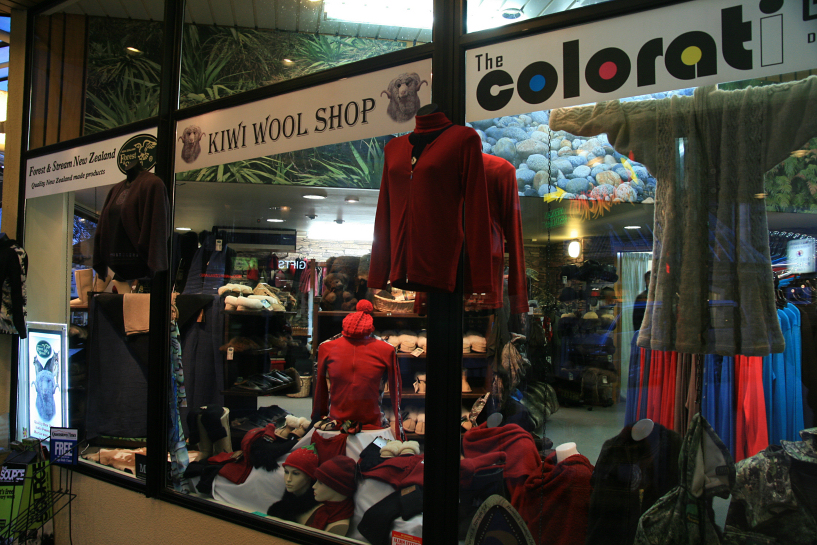 we got back to our rooms when the sun set and everybody ate their fair share of the delicious kebabs and fruits we bought earlier that day. while showering, i could see some boat lights on lake wakatipu from the glass window. the wifi was hopeless but it didn’t mean that i couldn’t sleep that cold night.
next» soul searching road trip oznz – day 10 (15/06/2010)