we started the day by going to the fuel station next to tiki lodge to fill up the tank. we left taupo at 8:30 am and the road took us along the windy shore of lake taupo. the weather didn’t look good, it was bleak with dark clouds hovering all around us. i stopped once at frethey drive scenic stop for photo opportunities just before we left the lake for good towards the south.
▼ tuwharetoa st., taupo from tiki lodge

when i drove through the town of turangi, it rained heavily and i had to use a cloth to wipe the windshield fog before zack discovered the heater button for the windshield. once activated, i was more comfortable driving but the climate was getting colder. about 10 minutes later, we entered tongariro national park through sh1, where the road ascends to the north island volcanic plateau and passing through rangipo desert, commonly known as the desert road because of its harsh, alpine climate, poor soil quality with minimal vegetation. heavy snowfalls are also a common occurrence. luckily it did not happen that day. but unluckily, the clouds were so thick that mt. ngauruhoe totally evaded and shied away from us. i kept turning my head to the right in hoping to glimpse the scenic mountain (which had taken the role of the fiery mount doom in the lord of the rings trilogy), but had to admit defeat after we were well beyond the mountain by the appearance of another famous mountain.

the sighting of the foot of the other mountain (the top was still shrouded by clouds) brought our hearts racing as we were seeing mt. ruapehu, an active volcano and also the highest mountain in north island. interestingly enough, we also started seeing white patches of snow on the ground! everybody was gushing with excitement at seeing the snow and opened our car windows to feel how cold it might be. it was indeed freezing and we literally ooh’ed and aah’ed at the views while the cloud slowly shifted around the mountain.

we pulled into a scenic stop with an open view of the mountain and all of us clambered out of the car to a wooden fence near the edge of a drop. aina and ija went cheerfully about 50m from the car to cup and hold a day or two old frozen snow. although the clouds never left the peak, at least it began to thin slightly and i could see some semblance of a peak. we took turn posing for photos with or without our winter jackets (just to show how tough we were) and the kids didn’t seem to mind the frozen temperature. the only downside to the view was the crossing of overhead transmission lines that were clearly visible in the foreground in contrast to the exceptional backdrop.
▼ mt. ruapehu

▼ testing body limit against the cold 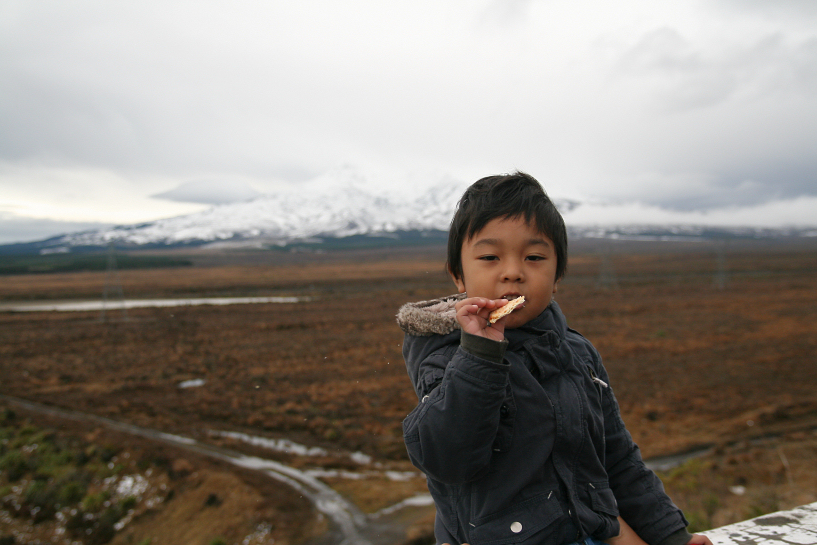 with freezing temperature and wind chill blowing against us, we got inside our heated car and drove another 10 km before reaching the military town of waiouru. we parked at the army museum and visited the military heritage such as tanks and canons that were exhibited on the compound. 15 minutes later we looked at mt. ruapehu for one last time, then it was time to move further south.
▼ aina and alif at the army museum 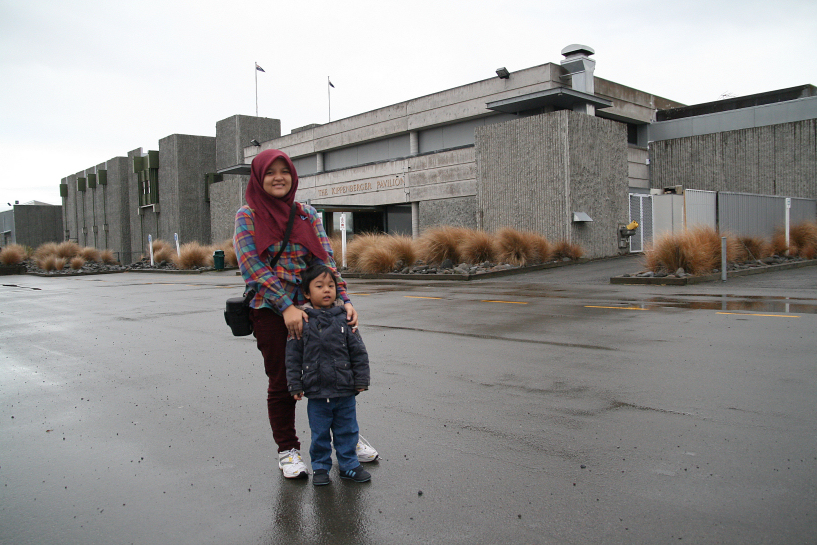 half an hour later, at 11:30 am we arrived at taihape, a small town of 2,000 urban population and parked along the main street (still sh1) in front of new world, a local supermarket chain. zack and ija went inside and bought donuts, huggies for the the kids (they were still wearing those at the time) and 5 dollars 2 degrees sim card with 20 dollars worth of talktime. we left the place and parked at mcdonald’s further down the road and had our lunch of the usual stuffs. i setup the phone, dialed bargain rentals car 2000 and informed them that i would be returning the car by 4:00 pm that afternoon. we still got 230 km to get to our final destination of the day. and hopefully before night time.

the rest of the long trip was spent on entering and leaving small towns along sh1 and marveling at the countryside. i drove passed hunterville, bulls, (stopped for a quick smoke), foxton, levin and near otaki, the sky was getting bluer and between paekakariki and pukerua bay, the highway veered next to the cliffs along the tasman sea with high rolling waves hitting the boulders and everybody was excited again. the road was so narrow with heavy traffic that there’s no chance of stopping by.

the road winded inland and crossed porirua harbour and i misread a signboard and exited the motorway into porirua town where we had to detour and subsequently got stuck in a school area but managed to get back on the motorway. i was a bit anxious as the fuel was almost empty but soon completely forgotten as we moved pass the hilly range and wellington harbour came and greeted us instead! the view of the narrow smallish city, its surrounding hills and its harbour that day were astounding. we moved along the three lane motorway slowly and nearing the city, i steered the car off the motorway into waterloo quay that ran adjacent to the harbour. i kept reminding the others to look for interislander ferry terminal on the left and once located, our quick stop to drop zack and others was only a small distance away further down the road. when we reached the wellington railway station on the right, i gave a turn signal to the left and entered bluebridge ferry terminal carpark on the left. i knew from reading google maps that there would be ample free parking lots at the terminal since the ferries only leave wellington twice daily and at 3:15 pm, the last ferry of the day had already departed.

zack, ija, alif and yomi got out of the car with the bags and i instructed them to cross the road at the intersection and from the lot, we could see wellington downtown backpackers (previously known as waterloo hotel) just 50m across from the railway station. i got back inside the car with aina and continued to drive towards the south, turning right into taranaki st. and found a fuel station to fill up the tank. after that, i drove for about 500m before turning into abel smith st. and entered the compound of bargain rental cars at 3:30 pm. they welcomed us and inspected the car and called a taxi for us. companion #2 and i parted ways after 1,010 km together on the road. we took the taxi back to wellington downtown backpackers to rejoin zack and gang who were waiting for us at the lobby. they had already checked in and led aina and i to our rooms, 2 adjointed rooms consisted of 2 tier bunk bed each with a shared bathroom.
▼ parting ways with companion #2

we left our rooms later and rushed through the busiest and trendiest street in wellington, lambton quay, looking for the terminal to kelburn cable car. after spending some time looking for it, we gave up and asked a passerby who duly showed us the hidden entrance and we took our first cable car of the trip up the hill towards wellington botanic garden. the view of wellington city from the hill was stunning and we lingered there until sunset. my original plan was to walk back to the city centre using the downhill path but since it was almost dark and the kids looked tired, we decided to take the cable car ride again downhill to lambton quay. we window shopped with the kids on our shoulders again and later ate our dinner at another mcdonald’s and bought some take away sandwiches at a subway outlet where we feasted in our rooms.
▼ wellington cable car

▼▼ at the top of the hill with views of wellington 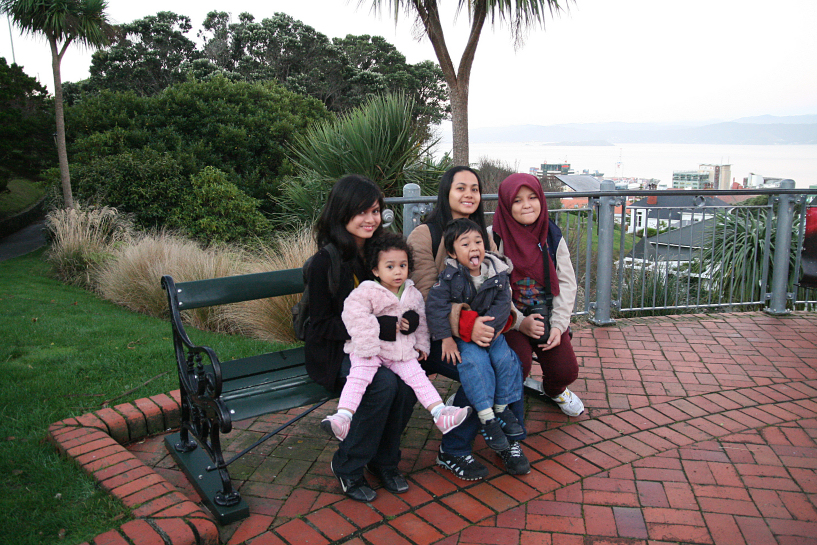 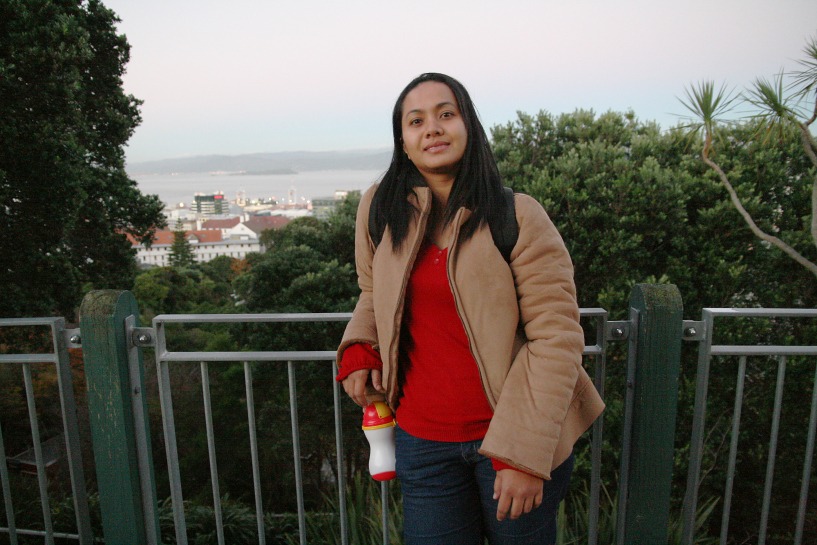 ▼ wellington city and harbour at dusk

▼ inside the cable car on the return trip

later, after a hot bath, i made a solo walk to the railway station and took some photos, decided against walking through the darkness to the beehive (the parliament building) about 300m away since it was already late and the temperature was freaking cold (4°c). i went back to the backpackers café to use wifi instead. ija and aina shared one room while zack, alif and yomi occupied the lower bunk and i on the top bunk of the other room. we all slept soundly that night.
▼ wellington railway station 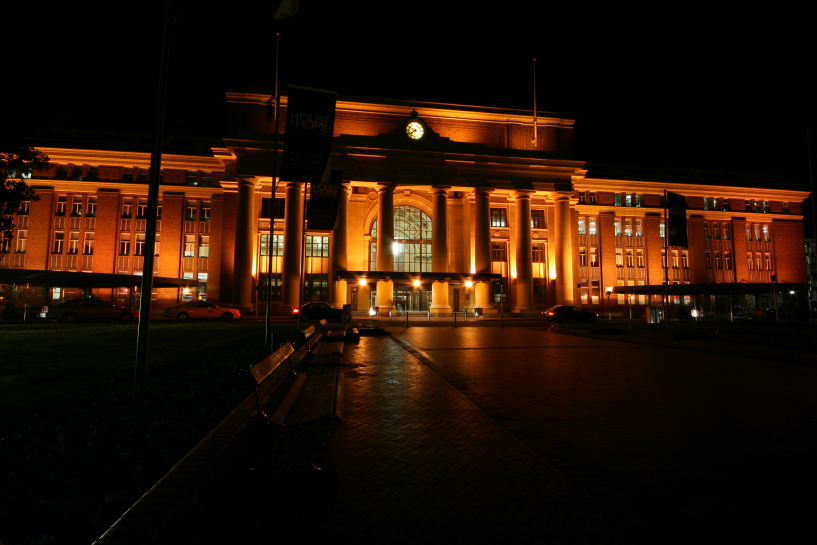